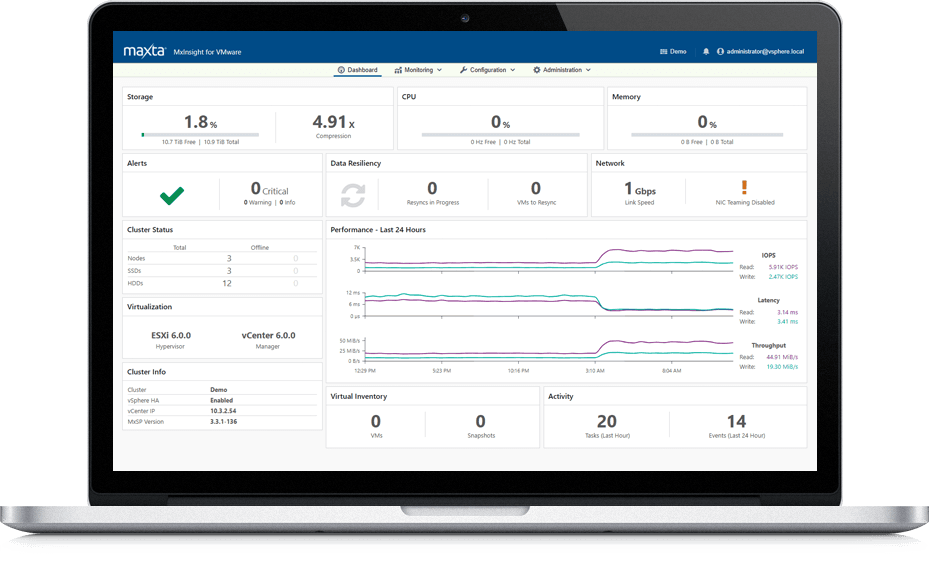 Appliance-based hyperconvergence solutions solve the management and complexity challenges of traditional storage, but are just as expensive. Why? Because you have to repurchase the software license when you refresh the hardware, and the only way to add capacity is to add a node.

Maxta Hyperconvergence Software reduces capital and operating costs by up to 70% and frees IT from the refresh and upgrade cycles of traditional storage. It collapses servers, storage and networking into a single server tier and gives IT the freedom to choose both the hardware and hypervisor they use. Unlike hardware-based hyperconvergence, with Maxta there’s no vendor lock-in, no “refresh tax” and no “upgrade tax”.

With Maxta, you can deploy hyperconvergence your way and make infrastructure transparent to the applications and users. 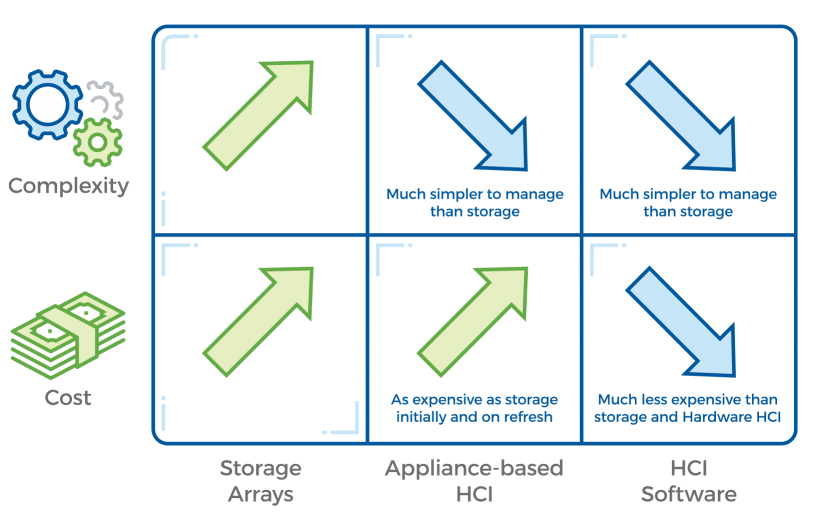 Maxta is software-only hyperconvergence, so you have a choice of hardware and hypervisors. Maxta supports VMware vSphere and Red Hat Enterprise Virtualization platforms, and works with most major server vendors, including Cisco, Dell-EMC, HP Enterprise, Huawei, Lenovo, Super Micro, and more.

No Refresh or Upgrade Tax

Maxta lets you refresh hardware without rebuying software, and makes it easy to scale up by adding capacity within nodes or scale out by adding converged compute and storage nodes.

Storage array and hyperconverged appliance vendors charge a “refresh tax” by forcing you to rebuy software when you refresh hardware, and don’t let you scale up within nodes.

Maxta is an application-centric platform. It optimizes performance and availability on a per VM and per vDisk basis, so you can reduce costs by running mixed workloads on the same cluster without affecting application performance.

Traditional storage can only create and manage storage objects, such as LUNs or volumes. Software-defined storage and even many hyperconverged solutions can only manage performance and availability resources at the cluster level, forcing you to silo applications on their own clusters. 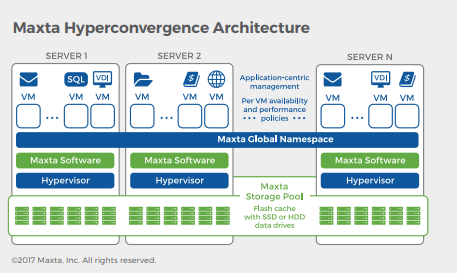 The combination of Red Hat and Maxta provides a cost-effective, powerful solution that supports a range of virtualized and containerized workloads, is easy to manage, and scales flexibly to meet current and future requirements.

Simplicity is in the DNA

1. A minimum of two Converged Compute/Storage Servers is required for high availability.
2. Hardware has to be listed in Maxta’s Hardware Compatibility List (HCL).

Can the software be installed on your existing server hardware?

This is the first sniff test of whether it is a true software model or a fake software model. Of course, you need to make sure the hardware has the right specifications to run the software, but you shouldn’t need to buy new server hardware. And don’t get fooled by the old trick of being able to run “trial” software on your own hardware, but you have to buy new hardware to put the software in production. True infrastructure software vendors like Microsoft, Citrix and VMware do not make you buy new hardware to run their software.

Does your server hardware have to be from an approved list of server SKUs?

If you do want to refresh your hardware when you implement hyperconvergence, does the hyperconvergence software vendor limit you to a certain set of server SKUs? If so, that isn’t really software; it’s just an appliance vendor separating out the appliance software from the confined set of appliance hardware.

Can you add capacity within the server?

The only way to add capacity with an appliance vendor is by adding another appliance. Even though some vendors offer a storage-only node, the step-up cost of another “pizza box” isn’t trivial. With true hyperconvergence software, enables you can add capacity to an existing server by adding drives to open slots, swapping in higher capacity drives, or by adding servers. If you can only add capacity by adding nodes, you have a fake software model.

Are you being forced into the same appliance software licensing model or do you have a choice?

Hyperconverged appliances tie the software license to the appliance, so when you refresh your hardware you get the privilege of repurchasing the software. This is a “term license,” which means you get to buy the software over and over again, and it’s the only option you have in a fake software model. While many software companies are starting to offer term licenses to provide subscription-like pricing, nearly all software companies still offer a perpetual license that you own forever. You should have a choice of perpetual or term licensing. Do you like the thought of owning the software for life, but don’t want to pay for it all upfront? Just lease the software from any number of leasing companies. It gives you the best of both worlds.

Can you add more memory and CPU resources?